Group of Korean soldiers on a rescue mission is sent to a secluded jungle island, where strange force affects their minds.

During Vietnam War the South Korean base in Nah-Trang receives a radio transmission from a missing platoon that was already presumed dead. Lieutenant Choi Tae-in is appointed to lead a small expedition to find and rescue the missing soldiers from the secluded area called R-Point. They travel on gunboat to the place, where previous platoon has landed and continue inland untile they reach a temple in the middle of the jungle. Even though the area seems to be deserted, but when they search for any sign of missing soldiers unusual events begin to occur.

R-Point is one of the few war movies that mix war with supernatural powers or unexplained phenomena. It tells the story of not widely remembered fact that Korean army was one of the biggest participants in the Vietnam War. Of course it isn’t based on any actual events, but the whole film is well developed, well delivered and worth watching, even if it isn’t typical war movie.

There is just one snag with R-Point - it is perhaps not really politically correct, but let’s face it the other races often say that all Asians look alike. Which isn’t true, but sometimes it is hard to tell one person from another if they don’t have any distinctive features (like f.e. blue hair or long hair). When it comes to army of course there is only one hairstyle, so it doesn’t really help. But if we dress them all in identical uniforms it becomes even harder to identify them. Also when they will wear helmets it’s hard to see their faces, so it’s almost impossible to identify them. But after all that when most of the scenes take place at night... then you can imagine how R-Point looks like for most of the duration. 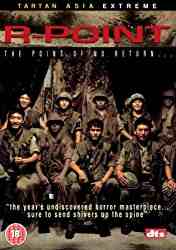