Hell Is for Heroes war movie

Hell Is for Heroes war movie

Hell Is for Heroes

During World War 2 American army regroups to prepare attack on the Siegfried Line. After heavy battles their forces are stretched to the limit and combat-weary platoon of Sergeant Larkin, instead of well deserved rest, is sent to guard part of the front line. The new member of the unit, Private John Reese, is former sergeant that was demoted after court martial, is jumpy and stays away from the rest of the platoon. When they arrive to their post all they have available is 6 men, some ammo and a collapsed bunker to defend over kilometre of front line. Soon it becomes obvious that on the other side the whole German division prepares to attack. Larkin has to find a way to convince the Germans that there are more defenders than there really are, so all the platoon members have to use their experience and ingenuity to stall German attack until the reinforcements will arrive. Company clerk, Private Driscoll, accidentally arrives to their part of the front line, who will not be great asset to the unit, since he does not even have a gun, but his jeep is another thing...

American war movie that has quite impressive cast (Steve McQueen, James Coburn, Bob Newhart) and interesting plot, but the story itself lacks realism. Nevertheless it is war movie that is worth to know, even for the original script - instead of heroes story we have simple soldiers trying to survive in the extremely difficult circumstances.

Hell Is for Heroes full movie 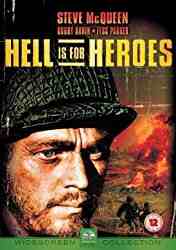 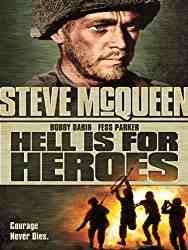 Creators of Hell Is for Heroes

Cast of Hell Is for Heroes

Events depicted in Hell Is for Heroes