In 1996 Srebrenica Polish IFOR forces on patrol are taking imprison the three mercenaries fighting for Bosnian militia led by Skija. Major Keller decides to save them from the mob and then lets them go. Polish headquarters send military investigator Major Kusz to check the Keller story, but soon the investigation is interrupted by information that NATO helicopter carrying some of the Polish soldiers have crashed in the mountains. Keller sets up the rescue team and leads his platoon into area controlled by Skija’s militia. Kusz insists on joining them, suspecting Keller would try somehow avoid him. On arrival to the crash site they discover that helicopter crew is dead, so they set out after the militia men, who killed them. They manage to locate the Bosnians and it turns out that they took two prisoners - female French journalist Nicol and a male Bosnian press representative Dano. Keller sneaks up to the militia camp and rescues the captives. It turns out that Nicol is carrying videotape that documents the atrocities done by Bosnians. Skija sends his men to intercept Poles and take back the tape.

As most of the Polish productions of that time the Demons of War was rather poor in quality when it comes to acting skills and special effects, but despite that it is quite interesting and involving plot. Parts of it were done with Rambo-like over-the-top scenes of indestructible major Keller, who knows everything, sees everything and fluently speaks several languages, but despite that it is a decent war movie. Of course there are a lot of things that might have been made much better, but looking at other Pasikowski productions this one is not that bad. 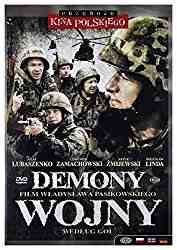 Creators of Demons of War

Cast of Demons of War

Events depicted in Demons of War