The true story of black pilots that joined the US Air Force during World War 2, but instead of fighting the enemy they had to fight the prejudices and racism within American forces. Just like in case of black soldiers in the army and navy the headquarters were under pressure to let them join the force, but they were reluctant to rely on their skills or knowledge, they were seen more as PR puppets to prove that army isn’t prejudiced, but they couldn’t count on being given anything more than basic training and auxiliary duties. The Tuskegee Airmen shows the story of pilots, who despite their efforts and skills were kept in United States until the pressure from White House to actually send them to war zone. Even then they were given the tasks that were considered easier and less risky since they were only black pilots and officers can’t be sure what they will do in combat situation.

Just like movie Black Brigade in 1970 The Tuskegee Airmen shows the important part of American history when even facing the world war American society just couldn’t overcome the racism. And unfortunately just like in the Black Brigade the movie tells the important message, but tells it in not very interesting way. Good cast mixed with average plot and not very impressive aerial scenes makes it just average war movie. 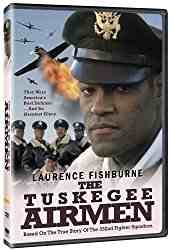 Creators of The Tuskegee Airmen

Cast of The Tuskegee Airmen

Events depicted in The Tuskegee Airmen