Story of American construction company that built the airfields on the islands captured by the Marines.

Boss of private construction company hired by the navy to build airfields on one of the Pacific islands is putting the pressure on the navy that his men should be armed in order to defend themselves from the enemy. But the international law prohibits arming civilians, so they are again sent to dangerous area without proper protection. Japanese army is landing on the island and the engineers has to defend themselves using every available means.

Another John Wayne movie portraying less known units of American army during the World War 2 - the Construction Battalion men (called Seabees from the initials CB). They were putting their lives in danger building airfields, restoring bridges and helping the army and navy in every possible work. The movie is rather good comparing to other John Wayne movies, but again just like in f.e. They Were Expendable or Flying Tigers movie mixes the romance with war story which doesnâ€™t really work. 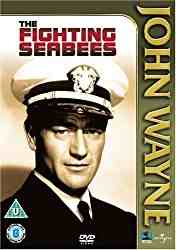 Creators of The Fighting Seabees

Cast of The Fighting Seabees

Events depicted in The Fighting Seabees