During the Cold War Colonel Jim Shannon is serving in the US Air Force base in Alaska. His squadron is guarding the border with Soviet Union and one day they get a seriously looking threat - a Soviet plane is heading straight for American territory without trying to establish contact. When intercepted Russian pilot deploys the landing gear suggesting that he has peaceful intentions and wants to land. On the ground Shannon is up for a shock - the Soviet pilot is a woman, who wants to defect to United States. Despite the warnings from his superiors that she could be Soviet agent, Shannon can’t help falling in love with her. But nevertheless the headquarters wants Shannon to show her some of the American tactics of intercepting targets using jet planes. This is the beginning of cat-and-mouse play...

War movie set in the US Air Force base during the Cold War, when nothing could have been treated as certain. Despite being mixture of spy game and romance, and even despite having John Wayne as main character, the movie is quite enjoyable. It contains a lot of real maneuvers made by real pilots (including famous Chuck Yeager), but in 1950s they didn’t have much choice - CGI was still in the realm of science fiction. The plot lacks realism, the romance seems forced (as any romance in John Wayne movies), but Jet Pilot rather accurately depicts the paranoia of Soviet-American competition during the early stage of Cold War and how both sides were trying to get the upper hand while keeping the appearances. 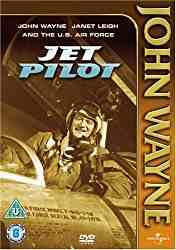 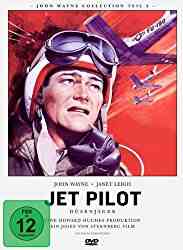