Also known as Operation Husky, was an Allied amphibious and airborne landing on the shores of Sicily that started the offensive towards Rome. The invasion was answer to Stalin’s requests that Allied should open a second front in western Europe and thus easy the pressure Wehrmacht was putting on Red Army in the east. And in fact it worked - Hitler was forced to relocate some units from Kursk to reinforce Italy.

Allied forces landed on South Eastern (British 8th Army) and central Southern Coast (American 7th Army) supported by naval bombardment and air strikes. The operation became quite a rivalry between two generals - George S. Patton and Bernard Montgomery - that would last until the end of the war. Montgomery pushed the Axis towards north and Etna, while Patton spread his forces and with risky manoeuvrers tried to be quicker than British. Unfortunately that was causing unrest among his men and also losses that could have been avoided. Patton gained the not very flattery nickname among his soldiers - "Old Guts and Glory", with explanation "our guts and his glory". The operation was a success - whole island was conquered within a month, most of the Italian forces captured, Germans suffered heavy losses.

Equipment used during Invasion of Sicily

War movies about Invasion of Sicily 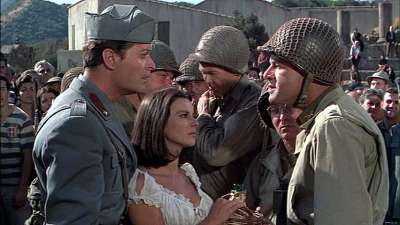 During World War II Lieutenant Christian is given a task of taking over a small village of Valerno in Sicily held by Italian forces, but when he arrives to Valerno the situation gets out of hand.

War games about Invasion of Sicily

Join the 82nd Airborne Division on their trail through most important battles of World War 2.