Occupied Warsaw, 1944, 18-year-old Stefan works hard to support his mother and younger brother, but the oppression from occupants becomes unbearable. Germans are losing the war, the eastern front is now inside Poland territory, so they use very brutal methods to stamp out any signs of defiance from local people. Stefan is also a member of Grey Ranks, part of the Polish Resistance, formed of the former scouts. Together with his sweetheart Alicja they join the upcoming Warsaw Uprising when command of Home Army (Armia Krajowa) gives the order to attack Germans that would soon retreat from Warsaw. In first days of the uprising the morale of the insurgents was high - Germans did not expected the revolt, Soviet army is closing from the east and it looks like the dream of freedom is about to be fulfilled. But soon the Germans regroup their forces and counter-attack and later the news arrives that Stalin decided to stop the offensive and not support the uprising. The resistance fighters are trapped in the city that is almost completely destroyed.

Another Polish movie retelling the story of Warsaw Uprising from the point of view of young resistance fighters that had to mature fast and face everything that war has to offer - the suffering, the pain, the uneasy choices. Unfortunately this time inexperienced director (it was his second feature film) decided to film the script that he wrote himself and the final effect is... bizarre. We have here the cliche story about young insurgents, who start something they were not prepared to finish, the soundtrack is mixture of popular songs from 1960s (that clash so nicely with the 1940s images), the action suddenly jumps into Hollywood-like slow motion sequences without any reason, the special effects actually are pretty special and also far, far from being realistic, and so on, and so on. Basically it is set of video clips mixed between rather uninspired and cliche scenes. City 44 is another example that good will is great in charity, but when it comes to making movies you also need good script and some talent. 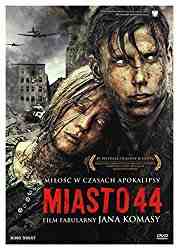