Battle of Warsaw in 1920 took place when Soviet Union was making a western offensive that aimed to start communist revolution in the countries like Germany. That offensive was halt on the Vistula River by the Poles. The Russians were preparing for the final push for the Polish capitol Warsaw, but Polish intelligence have decoded Russian radio messages and gathered the information that one of the Soviet armies is gonna make a manoeuvrer towards south-east, which would make a gap between two armies.

Polish leader, Jozef Pilsudski saw the opportunity for a counter-attack through that gap and gave the order to make a flank attack through Neman River. The battle is also known as the "Miracle over Vistula River" - the sudden counter attack of Polish forces drove a wedge between two armies and led the attack on the rear guard of Soviets.

Poles have killed over 20,000 soldiers and took over 60,000 prisoners while losing about 4,500 soldiers. It was a disastrous battle for the Russians and led them to decision to drop the whole idea of invading the Western Europe.

more about Battle of Warsaw on en.wikipedia.org

Equipment used during Battle of Warsaw

War movies about Battle of Warsaw 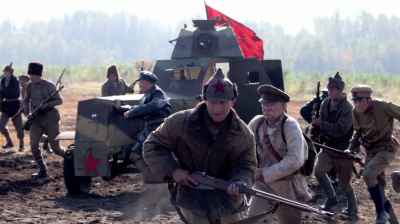 Based on a true events of battle that blocked the Soviet invasion of Western Europe in 1920.