Story of 12-year-old girl forced to become a rebel fighter in an African country.

In unnamed country in Sub-Saharan Africa 12-year-old girl Komona is abducted from her village and forced to join the rebels that are fighting the government forces. From the beginning she and the others are brainwashed to obey the older fighters. During her first battle she manages to survive the ambush and the others see her as a witch that can foreseen the future. From that point her life is slightly better as the leader of the rebels, Grand Tigre Royal, sees her as her mascot and his war witch that will help him to win. Soon she meets Magicien, albino boy who is shaman. He has feelings for her and helps her escape.

A sweet sorrow story that shows how people live in large parts of Africa, where it is easier to get a brand new Kalashnikov than a decent meal or clothes. With the story of Komona we see still how big influence on the lives in that area the magic has. In this brutal and senseless reality decent people has small chance to survive. And yet - despite it all - Komona finds the way to see her future in brighter colors. 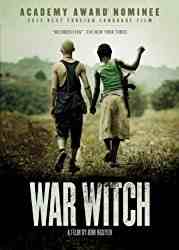