Biography of Louie Zamperini from 1930s, when he was noted athlete, all through the World War 2. From the fame as a runner for national team to the brutal reality of Japanese POW camp.

Louis Zamperini grew up in small town Torrance in California, where he was picked on by older boys for being son of Italian immigrants. He often got in trouble with the local police for stealing or getting into fights. That childhood would put him in jail some say if his brother would not try to train him as a runner. Sport has put a discipline in his life and built his character. In 1936 he took part in Summer Olympics in Berlin, but in 1943 he was far away from his home and from sport. As bombardier aboard B-24 Liberator he was attacking Japanese forces on Nauru Island. Attacked by enemy fighters the bomber is heavily damaged and few of the crewmembers injured, but they manage to return to base and crash-land on the runway. For next mission they are sent not into the fight zone, but on search and rescue mission aboard a plane previously used for spare parts, which will have a crucial influence. During the flight two of the engines fail and the plane crashes into the ocean. Only Louie and two other crewmembers survive on the inflatable raft, but days goes by and it seems that no one will rescue them. After 47 days spent in the middle of the ocean they are captured by Japanese sailors and sent to prisoners of war camp near Tokio. Corporal Mutsuhiro Watanabe, in charge of the camp, is cruel and brutal man, who takes great joy from torturing and humiliating Zamperini.

True story of Louie Zamperini, former Olympian, who served in United States Air Force during World War 2, later spent 47 days on the raft and rest of the war in POW camp, where his unbroken character made him target of constant abuse from camp commander. The biography of Zamperini is one of those, who seem to be perfect to make movies based on them, but unfortunately Unbroken is prove that some biographies should remain just stories. First of all the movie is a bit too long and concentrates on the elements from the biography of Zamperini that only support the title in showing how unbroken his character was - in real life the trauma from war time lead him to PTSD and alcoholism, which is hardly surprising after what he has been through. Second flaw is the narration that is bit chaotic and leads to... more or less no conclusion of the story at all. As war movie it shows what already been shown in other movies - the tragedy of survivors stuck on raft in the middle of the ocean, the senseless violence in the POW camps, the brutality of the war - and does not show it in particularly good way. Overall average movie based on uncommon (and true) story. 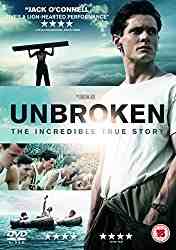 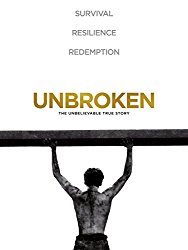 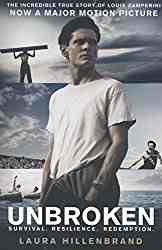