American film crew starts the superproduction in Southeast Asia when the actors get lost in the jungle.

Hollywood film crew flies to Southeast Asia to turn a Vietnam veteran memoirs into another spectacular war movie. The actors hired to play the members of the platoon are from different parts of showbusiness - fading action hero Tugg Speedman, five time Oscar-winning Australian actor Kirk Lazarus, who gets too deep into his role, rapper Alpa Chino and drug-addicted comedian Jeff Portnoy. During the filming the differences between them reach the boiling point and inexperienced director Damien Cockburn simply can’t handle the job of dealing with such strong personalities. When it seems that the production will never be finished Cockburn takes not very good advice to switch to guerrilla filmmaking and drop the crews together with the actors in the middle of the jungle. Problem is that at some point actors lose the touch with reality and are no longer sure if they are still being filmed or not. To survive they will have to deal with the wilderness, local drug dealers and their own delusions.

Tropic Thunder is not actually a war movie, but a parody of Hollywood showbiz approach to many themes, including Vietnam war and war movies as genre. The group of actors completely detached from reality have to face the real problems in real jungle, which leads to numbers of surprising discoveries about themselves. As most of the war comedies it is far from being realistic or historically accurate, but it is more or less point of the whole production. In a way it is entertaining to look behind the scenes how films are made, or could be made. 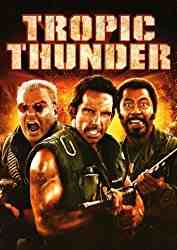 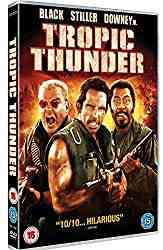