During Taiping Rebellion general Qingyun tries to build an army out of villagers and bandits to fight for the loyalists. But when he is successful in war the politics catch up with him.

In 1860s, during the civil war in China, also called Taiping Rebellion, between forces loyal to Qing dynasty and rebels from Taiping Heavenly Kingdom. General Pang Qingyun is the sole survivor of loyalist army - he lost all his men in battle and now has to seek refuge in nearby village. The locals, lead by Erhu and Wuyang, are making their living from attacking caravans travelling nearby. Qingyun manages to convince both of the leaders to attack a rebel convoy. They are successful, but soon after they lose the loot to band of loyalists, who raid the village. Qingyun again advices the villagers that their only way to get out of poverty is to fight against rebels as the independent unit for loyalists. Erhu and Wuyang are skeptical and don’t trust Qingyun, but he convinces them by joining them in blood ceremony - they all swear to care for each other like blood brothers. Qingyun leads them in series of victories, later turns towards the cities of Suzhou and Nanjing. He tries to get the government support, but is refused since the Qing officials are worried Qingyun would become too powerful. Nevertheless he attacks Suzhou, but lacking the power he is forced to set up a siege instead. Erhu sneaks into the city walls hoping to kill the commander of Suzhou. Unfortunately he is caught and that moment will put their brotherly promise to a test.

Chinese war movie inspired by Taiping Rebellion of 1850, but unlike other Chinese productions it is fiction only based around the real events and real places. It is decent movie, but lacks the vigour, pace and the spectacular scale of Red Cliff or Assembly. 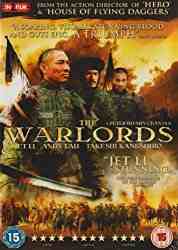 Creators of The Warlords

Cast of The Warlords