Two young men join their armies for the long conflicts that started in 1914.

In 1914 the life in England and Germany was peaceful, although the stormy clouds were already forming. Teenagers Thomas and Michael were living in the country and their biggest problems were their girlfriends, but soon the Archduke Franz Ferdinand was shot in Sarajevo and people on both sides were worried that war is inevitable. Thomas and Michael joined up the army in their countries and were hoping that the whole war will be over before they will finish their training. But soon Michael arrived to Belgium, and Thomas was sent to eastern front, where he was fighting Russians. The fate brought them both to one of the bloodiest battles of World War I - the Battle of the Somme.

British TV miniseries made in co-production with Polish TV to commemorate the anniversary of the end of World War I. The story shows the fate of British and German teenagers and their families back home when the long conflict was smoldering on the continent. Unfortunately just like in case of many movies made for TV it was filmed with limited budget and not very impressive script - it contains all the elements already present in other productions, like Passchendaele or All the King’s Men: from the basic training to life in the trenches and senseless brutality of the war. But the real problem is that we see how the soldiers reacted to the war, but we don’t see much of the war itself, only short scenes. 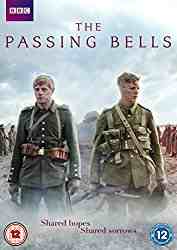 Creators of The Passing Bells

Cast of The Passing Bells

Events depicted in The Passing Bells