1942, United States are preparing their first offensive operation in World War 2 - the Guadalcanal Campaign to stop the advance of Japanaese forces. US Marines units are the first ones to land on the island and fight for the Henderson Field - strategic airbase. The landing is running surprisingly smoothly, but soon it turns out that Japanese have actually retreated into the jungle, where it will be impossible to find them. The first night for the Marines shows how hard this operation will be.

Miniseries based on the same idea as acclaimed Band of Brothers, but presenting the Pacific theater of war. We follow the fate of few of the Marines from the landing on Guadalcanal through their further assignments. Just like in case of Band of Brothers the plot is based on the real events associated with real people that fought on Guadalcanal and later other islands. Unfortunately this is where the similiarities between both productions end - The Pacific lacks a lot of elements that made Band of Brothers such remarkable war story. First of all the main characters are too similiar, operate individually and not as group, so with time it’s hard to follow which one is which. Second - the scenery - all islands look similiar, all battles look similiar, the weather is always the same, etc. Third - the pace of the story - in Band of Brothers each episode kept the viewer on the edge of the sit, while here we have few episodes rather dull. Fourth - the positive message - Band of Brothers, despite the horrors of the war, showed how people were able to keep their basic values and comradeship, while in The Pacific the main theme is the decline of any values and complete dehumanisation of the young men that got through hell on the Pacific islands.

Overall it is realistic look on the war on the Pacific and the horrible experience the World War 2 was for the veterans of US Marines. It shows the horrors of war on the tropic islands, but the main flaw of this project was that after Band of Brothers the viewers were expecting another thrilling war story, but at the same time glorifying the Allied forces. Just like in the saying that people shouldn’t know how the laws and sausages are made the creators of The Pacific showed us the truth we actually did not wanted to know. The war on Pacific was different from war in Europe - for US Marines on Pacific there was no glory, no parades, only suffering and scars they gained, physical and mental. 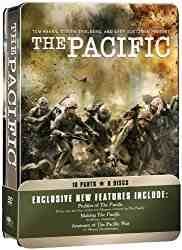 Creators of The Pacific

Cast of The Pacific

Events depicted in The Pacific

filmy wojenne The Lord of the Rings: The Return of the Kingstrony www grodzisk mazowiecki