Union cavalry unit, under command of Colonel John Marlowe, is given the mission of great strategic importance - to weaken the advancing forces of South the general wants to cut the supplies the Confederates are receiving. Marlowe’s orders are to attack the train depot in Newton Town, which is the main junction on the Newton-Vicksburg railroad. The mission won’t be easy, especially since Newton Town lies far behind enemy lines, but Marlowe is certain he will reach his target. Before the war he was railroad engineer and knows well how important this mission is for the war. He leads his unit towards Newton Town together with new regimental surgeon Major Kendall. The two don’t get along from the beginning, which makes their task even more dangerous, especially since they have to keep their presence a secret. While resting at Greenbriar Plantation Marlowe catches the servant Lukey eavesdropping while they officers were discussing their plans. Not seeing another option to keep their plans safe, he decides to take Lukey and the owner of plantation, Miss Hunter, as their prisoners.

Another John Wayne movie based on the same idea as many of his films - he as righteous and tough as nails officer, beautiful woman by his side and the risky mission that can change the fate of whole war. But beside that rather typical setting for him and few not really interesting scenes (that should have been omitted), it is one of the better movies about American Civil War. Of course it is only loosely based on real events (Grierson’s Raid that took place in 1863) and can hardly be compared to Gettysburg or Gods and Generals, but as for 1950s American war movies it is kept rather realistic during the battle scenes and overall it is quite entertaining production. 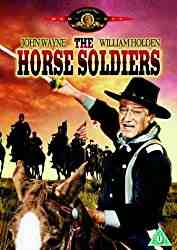 Creators of The Horse Soldiers

Cast of The Horse Soldiers

Events depicted in The Horse Soldiers