The Guns of Navarone war movie

The Guns of Navarone war movie

The Guns of Navarone

In 1943 about 2000 of British soldiers are trapped on the island Kheros between Turkey and Greece. They can survive only seven days before German will wipe them out, so the headquarters prepares plan to rescue them using destroyers. But one German fortification on small island of Navarone blocks all their options - the fortification is battery of naval guns supported by radar and garrison full of soldiers to protect it.

Captain Jensen, head of Special Operations Executive, orders the air strike, but it is doomed since the guns are placed in the cave in the middle of high cliff. His sees raid of commandos as the last chance to rescue soldiers trapped on Kheros. He sets up the team using his best men and sends them in a an old fishing boat to destroy the guns on Navarone.

Film based on Alistair MacLean novel, which was inspired by real events - battle of Island Leros - but the real operation had completely different objectives and methods used. In real battle, after Italy have surrendered, British troops have landed on the island to support the weak Italian garrison and try to stop Germans from taking control over the island (which failed). The Guns of Navarone is classic as novel and the war movie with great cast and (as usual in MacLean’s novels) rather complicated plot. The length of the movie could be a little much for the viewers, but overall it is good war movie.

The Guns of Navarone full movie 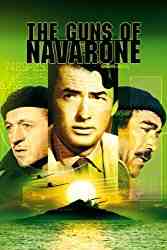 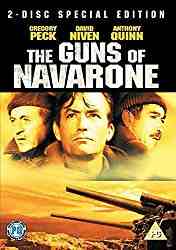 Creators of The Guns of Navarone

Cast of The Guns of Navarone 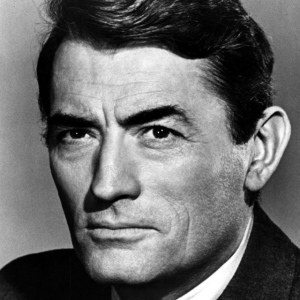 Events depicted in The Guns of Navarone