Colonel Kirby is appointed to pick the team of Green Beret commandos and take them on a mission in South Vietnam. Their first aim is to build and defend a camp on the remote jungle spot surrounded by Viet Cong and North Vietnamese army. But the second part of the mission is much harder - to go behind the enemy lines and kidnap a North Vietnamese general.

War movie directed by John Wayne and made while the Vietnam War was still on. It is affected by Wayne’s views on war - despite all the protests surrounding the Vietnam War Wayne made it as a praise to American involvement in war and to justify the involvement. And unfortunately it was made really heavy handed - parts of the movie seems like a propaganda flick made by completely brainwashed amateur.

To put politics aside The Green Berets as a war movie has some good parts and some bad parts - it isn’t particularly inventive nor realistic. Simple story made in almost western-like style, filmed in American forests that look nothing like the jungles of South-East Asia. 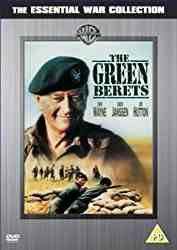 Creators of The Green Berets

Cast of The Green Berets

Events depicted in The Green Berets