Young officer resigns his commission and wants to get married instead of taking part in risky mission in the desert, but his friends see it as act of cowardice.

Young British officer Harry Faversham has just finished his training and is about to get married to love of his life Ethne. When soldiers of Mahdi besiege Khartoum Harry’s regiment is chosen to help General Gordon trapped in Sudan, but young man has doubts if he should take part in this operation - he has whole life ahead of him and would prefer to get married. He decides to resign of his commission, which enrages his father. Three of his friends (and fellow officers) send him white feathers, the symbol of cowardice, but the fourth white feather has upset him the most - it was from Ethne, who breaks their engagement. His former regiment sets out through desert to save the troops in Khartoum, but Mahdi predicted that and prepared a series of ambushes to destroy the relief forces. Harry, tormented by the guilt and repudiation, decides to disguise himself as Arab and set out on his own to help the British troops. He teams up with mercenary Abou Fatma and rushes to warn the officers about the dangers Mahdi have prepared, but mixed between the Islamic fanatics he has to watch his every step not to reveal who he really is.

Another adaptation of 1902 novel by A.E.W. Mason that tells the story of 1884 military expedition to relief the General Gordon forces trapped in Khartoum during the Mahdi rebellion in Sudan. Although the creators put together interesting cast the film fails to add anything new to the story that was told few times already. Decent directing, decent acting, not bad battle scenes, but overall average movie. 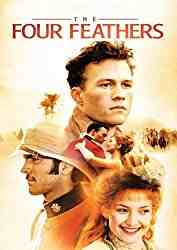 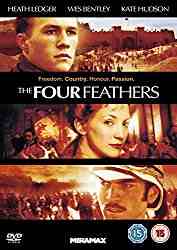 Creators of The Four Feathers

Cast of The Four Feathers

Events depicted in The Four Feathers