During American War of Independence the colonial forces were in the defence for over 10 months and general Washington was looking for a chance to break the long run of defeats with bold plan. Near New Jersey the garrison of Hessian mercenaries was located and Washington prepared the plan to cross the Delaware River and surprise them with their attack. The best time to attack was upcoming Christmas, but the winter conditions were far from favorable for such manouver.

Depiction of one of the most important battles of American War of Independence - after long streak of loses Washington tried to make surprise attack on the enemy despite all the risk that was behind that decision. Film shows not only the battle (that was in fact rather short), but mostly the doubts that were among the officers before the battle. As for historical drama it is good, but as for war movie it is only average. 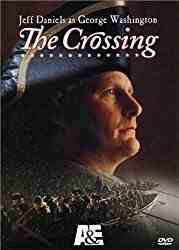 Creators of The Crossing

Cast of The Crossing

Events depicted in The Crossing