Germans lock up counterfeiters in concentration camp and use their skills to produce forged pound notes and destabilise Great Britain.

In 1942 Germans have gathered 142 counterfeiters in their Sachsenhausen concentration camp to start Operation Bernhard - the plan to destabilise British economy by flooding the markets with forged pound notes. Jew Sorowitsch is one of those counterfeiters who is using his skills and experience to forge the money, but just like the other he realizes that by that he supports his own oppressors. They try to slow the work down so Germans could not make use of their forgery, but not that slow so they would start to kill them.

Based on true events (memoirs of Adolf Burger) film follows the Jewish counterfeiter Sorowitsch and his complicated situation to keep the Germans happy and survive the concentration camp. This movie won the Oscar for best foreign film, but it is hard to point out what exactly made that big impression on Americans. It is not well known story for World War II, the movie was made with decent level of realism, but still it is only one of many decent movies. 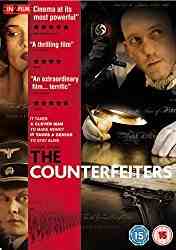 Creators of The Counterfeiters

Cast of The Counterfeiters

Events depicted in The Counterfeiters