During World War 2 German soldiers are trapped in the lone bunker in the middle of Normandy, but soon they realize they are not alone here.

Allied offensive in Normandy has broke the enemy defence lines and now Germans are in retreat with heavy losses. Lieutenant Krupp and the remains of his unit desperately are trying to get away from enemy through the forest when they come across a bunker. Initially they are shot at from the bunker, but soon they find refuge inside. It turns out that the whole crew of this bunker consists of just two men - veteran Mirus and a youngster Neumann. They are all alone with limited supplies and the enemy is all around the area. Krupp would prefer to quickly retreat further, but since one of them is wounded there is no way they could survive outside. They find a closed door inside the bunker, but Mirus tells them not to go there. This bunker is part of a whole system that was built in Normandy, so Krupp suspects tunnels below could be their way out of here. He and his men are veterans, who served together since the Operation Barbarossa, so the story Mirus told them about some dark forces living below the bunker is not gonna stop them. Especially since Baumann told them that every night Mirus goes downstairs alone...

Another British movie that mixes war story with elements of mystery or horror and to be honest in none of those cases such mix actually worked for the benefit of the movie. The film starts interesting, moves swiftly from war story into rather dark themes, but later fails to deliver on both - as war movie and mystery or horror movie. There are some good moments, the ending is nicely developed, but overall it lacks any strong motiff or culmination. 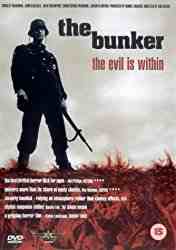 Creators of The Bunker

Cast of The Bunker

Events depicted in The Bunker