Tears of the Sun war movie

Tears of the Sun war movie

Tears of the Sun

During fictious civil war in Nigeria American special forces are on the search and rescue mission to save the American citizen - doctor Fiore. Unfortunately when they reach her she refuses to leave without her patients.

When sudden civil war breaks out in Nigeria American forces rush to rescue few of their citizens that are trapped in country torn by the fights. Lieutenant Waters with his SEAL team is chosen for mission to rescue doctor Lena Fiore, who is US citizen by marriage. She works in secluded catholic mission in Nigeria, close to the border of Cameroon, so Waters’ orders are to be deployed by helicopters near the mission, find and secure Fiore plus two nuns and a priest, escort them to landing zone, where they will be again picked up by helicopters are transported to safety in Cameroon. First part of the operation went well, commandos managed to reach the mission and find doctor Fiore, but she is unwilling to leave this place. Her clash with Waters is the first sign that things don’t go as they were planned. Fiore has 70 locals under her care and refuses to leave them helpless while the civil war is around them. To fulfill his primary objective Waters agrees to take the 70 people with them, which will slow them down and put whole operation in danger.

Tears of the Sun was quite peculiar project - on one hand we have rather unusual plot as for American war movies (although similar to classic Operation Burma), we have the rescued locals played by people who were actually refugees that has to run away from African countries at some point of their lives, we have promising cast, but... Yes, unfortunately there was but, or even quite few buts. On the other hand all through the movie we have mixture of good scenes and scenes that failed completely, we have typical American cheesy dialogues, not realistic battle scenes (f.e. Americans seem to use some magical bullets that kill enemies instantly without any sound and with single shot), not to mention that they have chosen Nigeria as the location of civil war, but Nigeria is one of the most politically stable countries in Africa... Overall it could have been a good war movie, but with flaws of the script, lack of care for the details and not the best casting (Monica Bellucci as doctor in the African jungle? come on!) it is a disappointment.

Tears of the Sun full movie 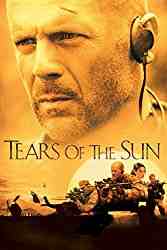 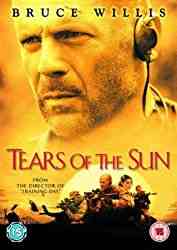 Creators of Tears of the Sun

Cast of Tears of the Sun