While helping two wounded soldiers elderly Estonian tries to show them how insignificant the war really is.

Two Estonians, Margus and Ivo, live in the secluded part of Abkhazia (between Russia and Georgia). They are the last two Estonians that live in the village, rest of them returned to their homeland when the place became too dangerous due to constant political and military conflicts. In 1992 rumors about new war reached them. Ivo, a carpenter, is old and got used to that place, while Margus thinks about leaving the village and returning to Estonia after the harvest of his tangerines. Two of the Chechen mercenaries fighting for Russia (or Abkhazia as the independent region) arrive to village looking for food. Ivo shares with them the food he has and they leave. Margus is desperate to harvest the tangerines, but it is too much for him alone. He asked the Abkhazian major for help and was promised that 20 soldiers would come around and help him, but since war broke out they did not show up. While fight starts near their houses Ivo finds two wounded soldiers, one of them is Chechen mercenary Ahmed, who visited him earlier, another is Georgian soldier Nika. He takes them to his home, but even wounded they can’t stop being hostile to each other. Ivo does what he can to keep them apart, while Margus is more and more obsessed about the tangerines.

Estonian war movie set during the 1992 War in Abkhazia. In style and story it is similar to Russian movie The Cuckoo, although the approach towards the themes of war and human nature are completely different. Film shows how difficult in modern war is to determine who the enemy is and how the important things are lost during senseless conflicts. Cameral cinema that shows how easy it is to hate your enemy until you have to meet him face to face. 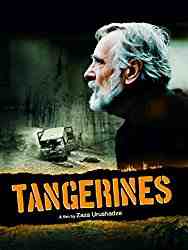 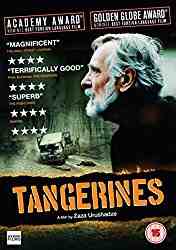