Italian campaign seen by the eyes of American war correspondent.

Film based on works of Pulitzer Prize-winner Ernie Pyle, who was war correspondent in Africa, Italy and Pacific (where he died in combat). The concept of movie showing the real life of American infantrymen was innovatory - we don’t see them as heroes conucting crusade in Europe, but we wee their normal life - when the march towards next city, when they eat, when they hide in the rain, when they talk in the shadow of the trees.

Interesting movie based on a real life events depicted in Ernie Pyle’s columns published in American newspapers during the war. 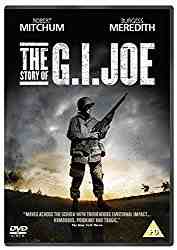 Creators of Story of G.I. Joe

Cast of Story of G.I. Joe