In prisoners of war camp the Americans try to figure out which one of them is passing informations to Germans.

Winter 1944, somewhere in Austria, prisoners of war camp Stalag 17 is full of American airmen. They organize an escape of 2 prisoners, Manfredi and Johnson, through the tunnel, but both of them end up dead. The Americans are suspecting that there is a traitor among them that informs Germans.

Film based on a stage play written by two actual prisoners of Stalag 17B Donald Bevan and Edmund Trzcinski. Stalag 17 is a character drama set in the prisoners of war camp with elements of humor. The plot is involving and entertaining even though the whole movie takes place within a single barrack and just few scenes outside. Definately worth to know, but the whole outlook has more to do with Hogan’s Heroes than historical events. 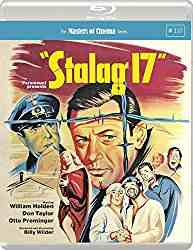