Sniper Thomas Beckett is discharged from Marine Corps after the events depicted in movie Sniper. Unable to continue military service he accepts the offer from CIA officer to join covert operation in Serbia. His target is renegade Serbian General Mile Valstoria, who CIA see as main figure behind the ethnic cleansings in Serbia. Beckett is joined by Jake Cole as spotter, army sniper who is currently on death row for killing an officer, and is black, which makes him stand out in the crowd, but speaks the local language. After the assassination Beckett finds that the mission wasn’t exactly as he was expecting it...

Sequel of 1993 movie with the same main character Thomas Beckett of US Marine Corps, but with completely changed background - instead of jungle we have city in Eastern Europe, instead of duel of snipers we have fairly interesting thriller, and so on, and so on. In general the creators changed almost everything about the original idea and to be honest it failed in many, many ways. First of all the plot is rather poorly written, characters one-dimensional, dialogues rather uninspired, the action sequences lack any realism and the whole movie is full of mistakes - f.e. everyone in Serbia are speaking Hungarian, which is odd, CIA sends to Serbia a black sniper, which I guess would help to blend in... It seems that the creators were not sure if they want to make war movie, a political thriller or some sort of spy story. Whatever it is that they planned to do it failed completely. 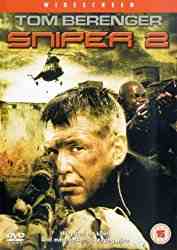