Young US Marine sniper Richard Miller is sent to Panama, where he will join veteran Thomas Beckett in covert operation. Their mission is to kill an important drug lord, who uses the local jungle areas as perfect hideout from authorities. With heavily armed guards and located in secluded area, where any army unit would be spotted from miles the only solution to stop the criminal is sending a two men sniper team and eliminate him. Miller is crack marksman, who has the required skills, but lacks the battlefield experience to reach the target. That’s why he is teamed up with Beckett, who knows the area and the reality of survival in local jungle. But Beckett is not happy with that assignment - he is a lone wolf and would prefer to work with experienced spotter rather than inexperienced sniper. Together they have to move through jungle, but soon the clash between them becomes a problem, especially since Miller is convinced he is the leader of the team. While closing on the target Beckett realizes they are being followed by another sniper, most probably working for the drug cartels.

Sniper is a mixture of war film and action movie, which means that realism wasn’t high on the creators checklist, rather they would concentrate on the action and adventure bits. Nevertheless they made a decent movie that is both gripping and entertaining. We see here a sniper team moving through the jungle and attacking well guarded target - something that snipers are trained to do best. But on the other hand Beckett seems to have some superpowers and spots everything everywhere and hears everything. 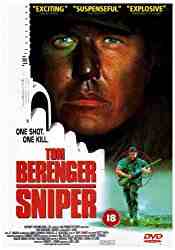