Platoon of US Marines arrive to Guadalcanal, where the new replacements meet their new commander - very strict and unapproachable Sergeant Stryker, who puts them to a tough training. Stryker do not have any friends among the soldier and it does not seem he minds that - he looks like he is obsessed with the training of his men. Soon the unit takes part in one of the biggest operations of World War 2, landing on Tarawa, islands well prepared for defence. During the attack several of Stryker’s men are wounded and the platoon leader killed, all the casualties caused by single pillbox. Marines try to destroy it and relief the pinned down platoon, but all attacks fail. Stryker manages to destroy the pillbox, but another of his soldiers dies of wounds. The invasion on Tarawa is over, Japanese are defeated on the island, but tension between Stryker and his platoon only rises. This can’t be a good sign before even bigger challange - the Iwo Jima.

Another war movie staring John Wayne as tough as nails Sergeant Stryker, who despite his personal problems has to prepare his men to one of the bloodiest battles in Pacific Theater. Unfortunately just like other John Wayne movies this one was also made rather heavy-handedly with simple dialogues, one-dimentional characters and almost identical content to other John Wayne movies. Also most of the scenes during the battles where taken from wartime newsreel footage, so the movie creators can’t be credited for those. It is fine tribute to US Marines, who with great courage and sacrifice fought on the Pacific islands during World War 2, but as war movie it is almost a cliche with only small diversions from other John Wayne war movies. 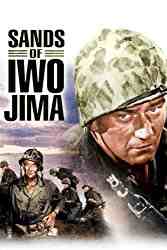 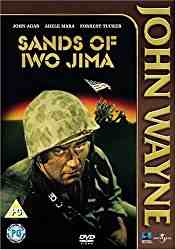 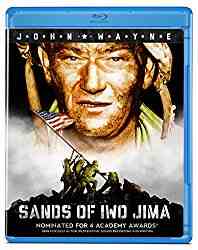 Creators of Sands of Iwo Jima

Cast of Sands of Iwo Jima