Sergeant Dunne returns to battlefields of World War I to protect brother of the women he loves.

During encounter with Germans Sergeant Michael Dunne kills young boy with a bayonet. Moments later explosion of artillery shell knocks him unconscious and he later wakes up in the military hospital. He is sent back to Canada, where his wounds are healed, but the psychological scar remains with him. He is diagnosed with neurasthenia, which means he is unsuitable for active service anymore. He joins the recruitment office and has to deal with idealistic boys that want to be shipped to Europe and join the war. During his rehabilitation he fell in love with nurse Sarah and when her brother, though unstuitable for service, joins the army to prove that he is true Canadian although of German descent, Dunne has to make a tough decision to return to Europe so he could protect the boy.

Love story set in the World War I times, where one of the bloodiest battle of World War I was depicted - the Battle of Passchendaele, where for 3 months Canadians fought hard for the small piece of land. The effort made to make the battlefield realistic is remarkable, but the whole project in many ways failed - the story is concentrated on the romance between Dunne and the nurse and the aversion of "true" Canadians to German-born Canadians, while the parts that take place on Western Front lack the realism or are ruined by the Rambo-like actions of main character.

It was planned as a tribute to all the Canadian veterans of World War I (including grandfather of Paul Gross), but even with big budget the final product is rather poor as war movie. 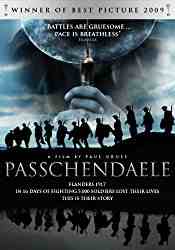