Young Langdon Towne arrives to Portsmouth, New Hampshire and is recruited to join Rogers’ Rangers that are about to make a daring, but dangerous raid behind enemy lines. Major Rogers is planning to attack Indian Abenaki village of Saint Francis and his men realize that they might not be able to get back. Aboard several boats they set up the river to find their target and avoid being detected by French forces.

The movie that would not be possible to made today, mostly because the main characters are about to slaughter most probably unarmed Indians just to make the point that helping France in war against Great Britain is not a good idea. But apart from that the film has everything to be a good war movie - interesting plot, daring raid, the unfriendly enviromnent to overcome and Spencer Tracy as a tough frontiersman leading group of 18th century commandos. 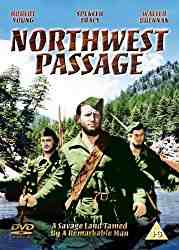