Yugoslavian partisans set up a small team to attack the strategic and heavily guarded bridge high in the mountains.

In occupied Yugoslavia, a mountainous country, every bridge is priceless, but especially one is extremely important for Germans - if destroyed would force their units to make 200 kilometers detour. And no wonder they assigned division of their alpine troops to guard it, each of pylons is made of reinforced concrete, there is a bunker on each end of the bridge and the surrounding areas are dovered by minefields. When Yugoslavs partisans learn about the upcoming transfer of German armoured divisions, returning from Greece, that could change completely the face of the conflict in the area, they decide to act on it and attack that particular bridge. They chose a man called Tiger as a leader of small commando that will carry out the attack, but they realize it won’t be easy without better knowledge about the bridge construction. They find one of the engineers, who was building it, but he tries to discourage them - first of all they will never reach the bridge so heavily guarded, but what is more important even if they would manage to come close enough to plant the explosives the bridge would survive. The construction was built to survive even if pylons would sustain damages, there are few very specific weak spots that could destroy the bridge, but only handful of people knows them. Tiger finds the solution to that problem - he forces the engineer to come with them.

As for Yugoslavian production The Bridge is quite original war movie - one of very few that doesn’t glorify the Tito’s partisans and instead concentrates on a small platoon of commandos and their mission to blow up the vital bridge. The plot is interesting and in some points similar to Force 10 from Navarone, but since it is Yugoslavian production it also has some weak points (like acting for example). Overall better thatn other Yugoslavian war movies, but comparing to other countries not so impressive. 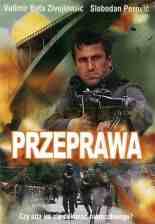 Creators of The Bridge

Cast of The Bridge