Men of the Fighting Lady

Journalist James A. Michener arrives to USS Oriskany aircraft carrier that operates near coast of Korea. The ship surgeon, Commander Dowling, tells him the story of group of pilots from USS Oriskany while they were attacking targets during the Korean War. Several times they were attacking the same target - a railroad junction, but each time they were asked to attack from lower altitude, which maked their task more risky. Two of the commanders, Grayson and Dodson, had different views on that tactics - while Dodson thought it’s puting them in unnecessary danger of being shot down, Grayson prefered more aggresive attacks. Soon the tention between them affects other pilots.

American war drama set during Korean War, that consists a lot of real combat scenes (including attacks on the target, the take-offs and landings on aircraft carrier and in-flight manouvers) which makes it one of more realistic war movies about aircraft carrier operations. Surprisingly, even though the movie was obviously made with US Navy cooperation, the creators manages to keep it free of the war-time propaganda and the plot concentrates on the human side of the airborne warfare and pilots rather than senseless patriotic brainwashing.

The script was based on true stories of the pilots that were serving over Korea. The stories were first published in Saturday Evening Post, article "The Forgotten Heroes of Korea" by James A. Michener. Overall it is almost documentary-like film with plenty of real action scenes. 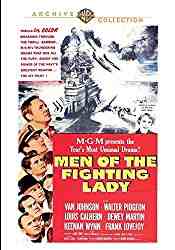 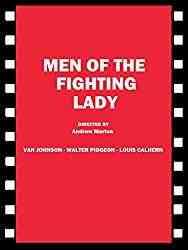 Creators of Men of the Fighting Lady

Cast of Men of the Fighting Lady

Events depicted in Men of the Fighting Lady