During Korean War platoon of American soldiers is cut off from their forces. They can’t contact their regiment, they are not sure where they should go or if there is a safe place to go. They head for Hill 465, where they expect to meet the American forces and on the way they meet the sergeant who is driving shell-shocked colonel in a jeep. The sergeant can’t help clashing with Lieutenat Benson, who leads the platoon.

War film depicting the chaos in American army retreating during the Korean War. Small unit cut off from the regiment has to face the invisible enemy and find the way to survive. Despite interesting cast the movie is rather bleak and in many ways disappointing - plot is simple, perhaps even too simple, only two characters are actually developed and the whole thing seems to go on and on without much events. 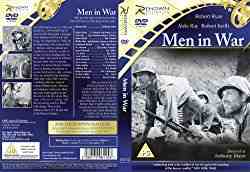 Creators of Men in War

Cast of Men in War

Events depicted in Men in War