In 1939 Polish cavalry unit under command of Captain Chodakiewicz is trying to avoid being surrounded by Germans. Before the war cavalry was the elite of Polish army, but the clash with the modern warfare, the tanks and armoured vehicles, proves they are obsolete now and instead of attacking enemy they just try to survive. While the whole Polish army is desperate to keep the defensive positions and stop the German offensive, cavalry is given order to cover the retreat of infantry. They take over from civilian a horse called Lotna - beautiful white horse that runs fast and jumps with ease. Every officer in the unit would like to have such fine horse, but as they soon learn there is a price to pay for being in charge of Lotna. Chodakiewicz is killed during a battle and whoever takes over Lotna dies soon after. Soldiers start to believe that the horse is cursed.

Andrzej Wajda war movie dealing with the September 1939 from Polish point of view - the uncertainty, fear, desperation of the defence and almost pointlessness of the fight against Germans. Based on a novel by Wojciech Zukrowski it is decent movie, but far from being as interesting or involving as similar titles that tell the stories from September 1939. The main problem is same as in other Wajda movies - it is mix of average war story and private influences of Wajda that usually are hard to grasp for people from outside his generation. It is interesting film, but mostly because of historical reasons, the plot isn’t as good as it could have been. 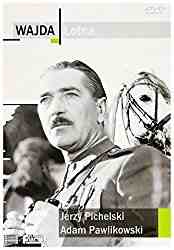