In 1940 French government created a camp in small town of Les Milles to keep there the foreigners, among them many Germans and German Jews, that were seeking refuge from Nazi dictatorship. Perrochon is appointed commandant of the camp and from the beginning he sees that the conditions in a post-industrial buildings are far from being suitable, but his superiors don’t really care - the foreigners are sent there only for temporary period before the government will work out some policy what to do with them. But in May 1940 the situation changes with the invasion of Germans - the internees, among them a lot of artists or active anti-Nazi activists, fear that the French government will give them back to Germans. Perrochon is approached by the representative of United States, who are willing to help Perrochon in his plan to evacuate the internees by the train.

French war movie based on the real events that took place in 1940 when the German invasion caused a lot of chaos and uncertainty among the internees and refugees that were on French territory. The commandant of the camp of Les Milles was doing everything he could to save them from being returned to Nazi Germans that they were running away from.

The film was co-produced with Poland (with quite few Polish actors used in the parts of Jewish artists) tells the story in a way similiar to Süskind or Schindler’s List, although the events take place before the German occupation, so the risk Perrochon takes is significantly smaller. With good cast and not bad script the film presents not well known episode of World War 2. 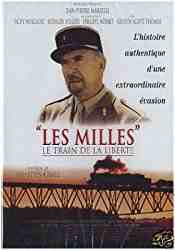