In 1936 Janusz Korczak, Polish-Jewish doctor and author of children’s book is informed by the radio station manager that his program is temporarily suspended. It is not clearly said, but Korczak knows that the reason behind it is that he is Jewish. He organizes the vacation for his current and former pupils from orphanage, who complain to him that he did not prepared them for the world, where they meet with anti-semitism. In 1939, after the invasion of Poland, Korczak serves in the army and walks the streets in the uniform. His former pupils tries to convince him to get rid of the uniform and hide from Germans, but Korczak refuses. After the ghetto is organized in Warsaw the orphanage is moved and during that operation a cart full of potatoes is requisitioned by Germans. Korczak tries to intervene, but Gestapo arrests him. After being released from prison Korczak returns to orphanage and tries to save as many children as he can, which is not easy since there are very limited food resources in the city and Korczak has nothing to trade. He has to count on what he can plead or force of the people he knew before the war, but each day is constant struggle to feed the children and keep them away from the cruelty of the outside world.

Film based on the true story of Janusz Korczak, the Polish-Jewish doctor, who was since 1920s running orphanage in Warsaw. He refused to leave Poland even though he was mistreated for his descent, during the war he never have left his pupils and faced many dangers to keep them alive in occupied city. Wajda managed to show the highlights of this truly remarkable man before and during World War 2 that shows his determination and inflexibility to the evil around him. Very powerful movie. 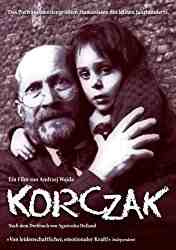