During World War 2 American Lieutenant Morris is assigned to a British unit that is preparing to make a far behind enemy lines mission. From the start he doesn’t get along with the unit commander, British Captain Howell, especially since Howell begin to suspect that Morris is having an affair with his wife. Nevertheless they set on a mission of surprise and deception through the desert to reach a German airfield. According to Allied intelligence on this airfield airplane carrying General Rommel is going to land and their mission is to kill the Desert Fox, who is behind all the success of Afrika Korps.

Italian war movie set in the Sahara and heavily based on the difficult environment of the African desert. Comparing to other Italian movies from same era it is done with decent effort (they used modified Egyptian M4 Sherman tanks to simulate German tanks, but at least they didn’t use bits from other movies or World War 2 newsreels). Up to a point the plot is actually really interesting, but unfortunately later it sinks into story similar to Australian movie Kokoda, when the survival on the desert is the main theme while the war is left far behind.

The story is fiction, although based on Operation Flipper from 1941, when daring raid of British special forces was aiming to strike into the presumed German headquarters near Beda Littoria in Libya. The operation itself was complete disaster with all of the 29 soldiers involved killed or captured. Kill Rommel took the basic idea and built completely different story around it. 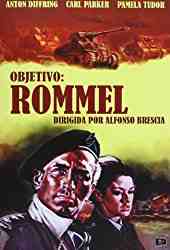