King Philip II of Spain sends his army to crush the revolt of Netherlands. Citizens of Haarlem decide to take the stand. Rich widow Kenau, after death of her daughter, leads a group of women into fight.

In 1568 the Dutch revolt against the king Philip II of Spain has begun with taxes and religion in the background. Until the Spanish king started his brutal campaign to regain the territory most of the cities in Netherlands were keeping the distance towards the independence, but when the Spanish army begun to burn the cities and slaughter the inhabitants a lot of them decided to join the revolt. In Haarlem rich widow Kenau Hasselaer was running her business without getting involved in politics and she tried to keep her children away from trouble, but her daughter was caught by Spanish among the young people, who burned the Christian church. Despite her pleadings the daughter was put on the bonfire to be burn as heretic. The news about numerous cities being plundered by Spaniards make the citizens of Haarlem, including mayor Wigbold Ripperda, think that joining the revolt could be a good idea since they might get killed anyway. This time Kenau is determined to take the stand - she supports the idea of defending Haarlem and helps to bring the mercenaries to town. But when the Spanish army arrives the size of it puts the fear into hearts of defenders. Don Diego, commander of the unit, brought with him the artillery and engineers that should take care of the city walls. Kenau and Ripperda are counting on the winter to force the enemy to retreat, but they don’t know Don Diego has a support from one of the locals.

Dutch war movie telling the story of Siege of Haarlem, during which the legend of Kenau Simonsdochter Hasselaer was born. Up to this day it is still matter of controversies if Kenau had that big influence on the defence of the town, but she was one of the merchants in Haarlem during the siege. According to some sources she was the fearless defender of the city, who led the group of 300 women in fight and in was one of the leaders of the revolt in Haarlem. Film depicts her as a widow turned warrior, rather than businesswoman, who supported the cause. There are battle scenes made with decent effort, but a lot of the plot concentrates on the non-military ways the defenders were trying to survive and discourage Spaniards from keeping up the siege. Overall decent historical drama with realistic view on the era. 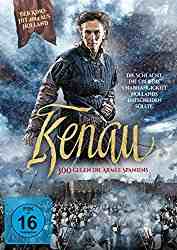