Stones for the Rampart war movie

Stones for the Rampart war movie

Stones for the Rampart

During World War 2 Polish teenagers from scout organisations join the Gray Ranks (Szare Szeregi) of the Home Army (Armia Krajowa) resistance units. Since they are young their only assignments are simple operations like painting patriotic slogans on the walls, throwing teargas bombs into cinemas or taking down German flags. But everything changes when one of them, Rudy, is arrested and taken to the Gestapo headquarters in Warsaw. Using all the methods they know (which were fear, torture and endless beatings) the Germans try to get the names of the underground organisation members out of him. Rudy is tough, he feeds them only with names of the people that are already dead, but with each day his health deteriorates. His friend, Zoska, tries to force the Home Army to help him prepare action in which they could free Rudy, but the officers see that Gray Ranks are too inexperienced and too poorly armed to carry out such task. Also they see no point in putting in danger a lot of civilians to free just one man, but Zoska is determined to help his friend, so he prepares a plan to attack the truck in which Rudy will be transported for interrogation.

Another film based on famous 1943 Operation Arsenal in which teenage resistance fighters attacked the guarded transport truck trying to free their friend Rudy. This time the creators recreated the story that, in their opinion, would appeal to younger generations, but while they used modern music, more edgy script and gave the fighters more badass outlook they completely lost the realism factor - it seems more like action movie than war movie based on facts.

Stones for the Rampart full movie 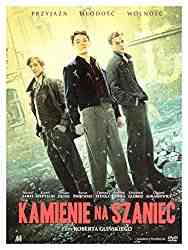 Creators of Stones for the Rampart

Cast of Stones for the Rampart

Events depicted in Stones for the Rampart