How I Won the War war movie

How I Won the War war movie

How I Won the War

Lieutenant Goodbody is put in charge of a platoon despite the fact that he lacks skills, charisma or even good judgement to be an officer.

Lieutenant Goodbody is young, naive and idealistic officer, the pride of his nation, who gets his wartime-commission (sort of temporary officer status for the time of war) despite lack of skills required to be in the command of other people. His platoon is full of slackers, who are far from typical Tommies you will see in the movies - they prefer to keep the low profile and stay out of trouble rather than charge the enemy with patriotic song in their hearts. When they are transferred to North Africa their first assignment is a crucial mission for the whole army - Goodbody is given order to build a good cricket field in the desert. Afterall what is the point of fighting Germans when nearest cricket field is thousands of miles away? Goodbody takes this nonsense mission as his patriotic duty and choses a spot for the field. Soon his men are using all the methods they know to either avoid any work or make Goodbody drop the whole idea.

Dark comedy based on strongly anti-war novel How I Won the War by Patrick Ryan, a World War 2 veteran, who served in Tunisia, Italy and Greece. He turned his experiences from the war into a book that presented satiric view on the pointlessness of the war and the wide range of characters he has met during the service. Unfortunately script for the movie was written by Charles Wood, who took the main themes from the novel, but decided to change the style to more surrealistic, similar to one of his anti-war plays, Dingo. It is unfortunate since the book stripped of the Ryan’s subtle style becomes chaotic and uninteresting - the main themes are there, but hidden behind incoherent dialogues and less than skillful directing. Overall a very poor film that tried to show the view on war usually absent in war movies, the view of a man disillusioned with war, the army and the patriotic pathos, but How I Won the War failed on so many levels that it is painful to watch.

How I Won the War full movie 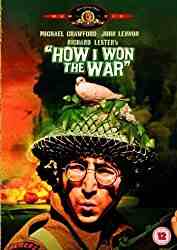 Creators of How I Won the War

Cast of How I Won the War

Events depicted in How I Won the War