Polish double agent in German army goes after his love and the famous treasure of Amber Room.

End of World War 2 is near. Hans Kloss, Polish agent J-23 working undercover as Abwehra officer, receives information about Amber Room treasure that Germans will soon transfer from besieged Königsberg to Berlin. Kloss has to act fast to stop them and not let Soviets get their hands on it. His archenemy Hermann Brunner of Gestapo is keeping close eye on him, still convinced that Kloss is a double agent and hoping to finally find any evidence. Soviet offensive closes in on Königsberg and they both have to find a way of surviving.

Story based on popular 1960s series Stake Higher Than Life this movie tells the story of how the struggle between Hans Kloss and Hermann Brunner ended with the story of Amber Room mysterious disappearance tangled in.
Also the plot takes place in different times - part of the story takes place during the World War 2 and another part after the war, when Kloss is retired and lives in communist Poland.

To put it in a nutshell the idea for this film was some sort of closure for the popular TV series or to be exact the desperate attempt to make some money on the reputation of old TV series. The plot is far from the original (treasure hunting instead of spies struggle), the style is far from original (action instead of subtle plots) and the final effect is, to put it nicely, rather laughable. From theatrical costumes, through poor acting, horrible dialogues, unrealistic special effects to the bitter end - the absolute lack of realism and very uninteresting plot. It is by far one of the worst war movies in history.

Warning: imagejpeg() expects parameter 1 to be resource, boolean given in /frey-united/warmovies/txt/movie.php on line 94

Warning: imagedestroy() expects parameter 1 to be resource, boolean given in /frey-united/warmovies/txt/movie.php on line 94 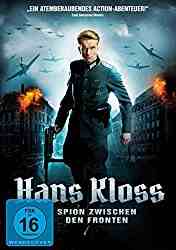