Carthaginian commander Hannibal plans attack on Rome from side they did not expected - he is about to cross the Alps with his whole army.

In 218 BC Roman Senate received the alarming informations that Carthaginian commander Hannibal have set out to attack the Rome. But keeping in mind that Romans have powerful fleet he chose not to attack directly towards the Rome, he chose the longer route through the Spain. For Romans the task of crossing the Alps seemed impossible to complete, especially since Hannibal brought with him his war elephants, horses and soldiers not prepared for winter weather. Nevertheless Hannibal begun his travel without meeting any opposition. Romans tried to set the local tribes against the Carthaginians, which slowed down the advance, but Hannibal knew that the tribes hate the Roman domination as much as he is and finally reached the agreement with chieftains and gained their support. On the way his troops captured Sylvia, daughter of Roman senator Fabius Maximus, they were hoping will become valuable hostage, but instead Hannibal fell in love with her. Private and political pressure puts Fabius Maximus in difficult position and finally he decides to face Hannibal in battle.

Italian historical drama based on the Second Punic War and famous crossing of the Alps by Carthaginian army. Just like in case of most Italian war movies the real story was only a seed that started the plot and the film itself switched quickly from beind historical drama into romance story with more or less historical events in background. Another flaw in Italian productions war realism - and this movie is not an exception - we have here Indian elephants instead of much bigger African elephants, which makes looks the whole thins like a circus. The battle scene was done with decent effort, although the scene filmed in studio were mixed between the outdoor scenes and thus the film lost a lot. It is typical production from that era - cheap and not very realistic props, one star, a lot of redundant scenes, especially romance subplot, but to be fair it isn’t as bad as some of the Hollywood historical dramas, it’s just cheaper and with less care about details. 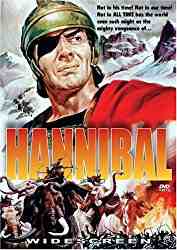