Oberleutnant Krafft is sent to officer school to pursue investigation in suspicious death of one of the instructors.

After problems with his superior on Eastern Front Oberleutnant Karl Krafft is sent back to officer school in Germany. General Modersohn gives him the task of pursuing investigation into death of one of the instructors. The experienced officer died in the explosion during the outdoor lesson on planting explosives. General is not convinced that it was accident and orders Krafft to make discreet snooping.

Miniseries based on Hans Hellmut Kirst and just like his other works (f.e. Night of the Generals) it is almost detective story set in the times of World War 2. Almost whole plot takes place in and around the officer school, which doesn’t make this much of a war movie, but again, just like in Night of the Generals, Kirst concentrates more on characters and less on the plot itself. Behind rather simple story film unveil the complicated web of tiny facts from the past of the people involved that made the difference and created who they are today.

It isn’t typical war movie - it takes some patience to get through the every day events to get to the bottom of the personalities involved in the investigation, but Kirst made it interesting and rewarding enough to be worth watching. Since he was German officer himself he usually based his novel on his own memories and they give look into state of mind of Germans during World War 2. 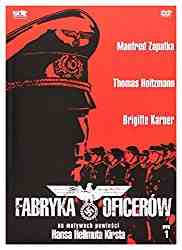 Creators of The Officer Factory

Cast of The Officer Factory

Events depicted in The Officer Factory