El Alamein - the Line of Fire

In 1942 young student from Bologna volunteers to join the army and as Private Serra arrives to North Africa, where his infantry division is taking part in fights against British 8th Army near El Alamein. Serra believes in the fascist propaganda that British lines are on the verge of collapse and soon Italian army will march into Alexandria. But after arriving to his post he learns about completely different reality, reality in which Italians have been dug in on their defensive positions for a while and without much supplies their most important job is to stay low since their positions are frequently bombarded by British mortars. What keeps the British away are the minefields around, but one of the patrols find a camel that somewhat wondered through them, which makes the soldiers believe that British have actually already cleared the passages through the minefields. To make things even more surreal truck gets lots in the desert and arrives to the trenches. Inside is a horse that general planned to use for his triumphal march into Alexandria.

Italian war movie that shows how the fascist war time propaganda clashes with the reality of conflict in North Africa. We see through eyes of young student, who just joined the army how poorly equipped, sometimes poorly trained and with insufficient supplies Italian soldiers have to deal with the desert climate and dangerous enemy. It is unusual movie for Italian cinema - realistic, kept down to earth, without any spectacular scenes. But this approach somehow leaves the viewers wanting some more - Serra becomes disillusioned and... that’s about it. Even the battle scene is cameral and leaves much to be desired. 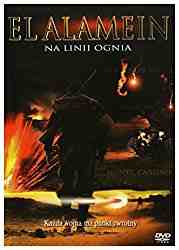 Creators of El Alamein - the Line of Fire

Cast of El Alamein - the Line of Fire

Events depicted in El Alamein - the Line of Fire