British soldiers on the training mission in the wilderness encounter the enemy they weren’t prepared for.

While on the training mission in the forests of Scottish Highlands platoon of six soldiers is expected to reach a given destination while group of SAS commandos will try to ambush them. Sergeant Wells tries to outsmart the opponents and decides to take not the obvious route through the area. On the way they stumble upon a remains of provisional camp with mutilated bodies of SAS soldiers lying around. Only survivor, Captain Ryan, who is unable to even describe what attacked them. Soon his explanations are not necessary since the platoon is attacked by the wolf-like beasts. One of the soldiers is dead, Wells is wounded, Private Cooper carries him to a road, where the remained soldiers meet a zoologist Megan. She takes them to her car and drives to a secluded house in the middle of the forest. When the dark falls the creatures surround the house.

Another British movie that mixes the elements of horror, mystery, fantasy and war. And to be honest it’s another failed attempt. The plot is not actually that bad, but the special effects used in this movie (or rather lack of special effects) makes it all look rather cheap and like work of amateur. Of course it’s hard to make creatures life-like (especially since they don’t really exist), but the costumes used in the movie are way below standards of today cinema. Also the film leaves very little space for the development of the situation of the main characters - the creatures around them seem to be indestructible, so all their efforts are futile anyway.

To summarize - interesting plot, well built atmosphere, but spoiled by the fight scenes that are rather poor and pointless. 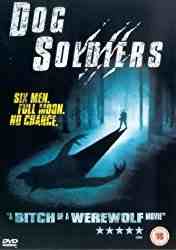