Hitler plans to finally defeat Yugoslavian partisans - by the paratroopers attack on their headquarters. Based on real events.

Hitler puts pressure on General Rendulich to finally destroy the Yugoslavian partisans that are keeping the German forces occupied in Balkans. Rendulich decides that to weaken the opposition they should hit the headquarters of Josip Broz Tito, the main commander of partisans, and if possible catch or kill Tito himself. Germans prepare combined operation - paratroopers are dropped on the expected location of the headquarters and at the same time ground forces are surrounding the terrain.

Like other Yugoslavian war movies Raid on Drvar is a mixture of depiction of real events (that took place in 1944) and a propaganda bits showing heroism of partisans and the bestiality of German army. And like other Yugoslavian movies this one also has very specific narrative style - just showing the events without any interpretation nor giving them deeper meaning. And unfortunately the creators have used several parts of the film straight from real World War 2 newsreels with horrible, horrible effect (f.e. partisans look through the binoculars and see closeup of Titoâ€™s meeting with foreigners obviously taken from completely different source).

Just like other Yugoslavian war movies shows important battles of World War 2 on Balkans, but does it in rather inapt way. 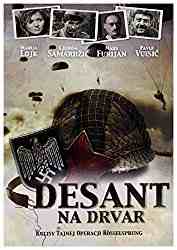 Creators of Raid on Drvar

Cast of Raid on Drvar

Events depicted in Raid on Drvar