In 1944 US Army was preparing to cross Rhein and push towards Berlin. Still unsure of the actual potential of German army American intelligence decided to use German prisoners of war as agents. Those willing to cooperate with Allies, or those who can be persuaded to, would attend a quick course of spy skills and sent behind the enemy lines to provide vital informations about the strength and location of Nazi units. Colonel Devlin chooses two prisoners - Sergeant Rudolf Barth, former thief and circus worker, and Corporal Karl Maurer that seems to be disillusioned with the outcome of the war and would prefer to work for the winning side. Devlin gives them codenames Tiger and Happy. American intelligence received informations that one of the German generals might surrender his entire corps if he would negotiate good solution with Allies. Devlin selects Tiger to team up with Lieutenant Rennick, the two being his link with that general. Devlin doesn’t trust Tiger, but he knows the area best. Happy is given mission to find the 11th Armored Corps, unit that might thwart the whole deal.

Film based on a true story of German prisoners becoming the American intelligence agents near the end of the war. It shows the moral dilemmas that they had to face - join the enemy they were fighting just weeks ago or stay in POW camp and risk their lives under suspicion from still loyal Nazi Germans. Although interesting the movie isn’t very impressive - lacks quality of a good thriller that would keep viewers attached, plot is rather slow and the whole plot was seriously underdeveloped. 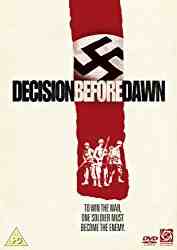 Creators of Decision Before Dawn

Cast of Decision Before Dawn

Events depicted in Decision Before Dawn