Four Tankmen and a Dog

Story of Polish T-34 tank crew that joins the offensive towards Berlin.

Polish war movie series telling the adventures of Polish T-34 tank crew on Eastern front from the start (when Polish armoured forces were formed in Soviet Union) up to the siege of Berlin. The crew consists of the four tankmen and a dog Sharik owned by the youngest crew member.

The series are fondly remembered in Poland although it was criticized for the lack of realism and creatign the false image of the friendly relations between Polish and Russian armies - Soviet Union have invaded Poland in 1939 and later was responsible for massacre of Polish officers in Katyn, which made the relations with Stalin’s army rather restrained to say the least.

Here we have a Polish crew under orders of trained in Russia officer that gets together with Polish army through their homeland occupied by Germans. Many real tanks from World War 2 were used, but most of the events are created for adventure reasons and are far from realism. 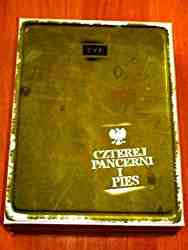 Creators of Four Tankmen and a Dog

Cast of Four Tankmen and a Dog

Events depicted in Four Tankmen and a Dog