A US Army officer Lieutenant Colonel Serling, the Gulf War veteran, conducts investigation in rather delicate matter. A female helicopter pilot Captain Karen Walden is about to posthumously receive the Medal of Honor for her actions during Gulf War and thus become the first woman to be awarded that particular medal. Serling is given the task of finding out if Walden’s actions were in fact worthy of the highest US military award. From files he learns that Walden was pilot of Medevac UH-1 Huey that flew into enemy territory to rescue crew of crashed UH-60 Blackhawk, but on arrival they have found the survivor surrounded by Iraqi forces. Walden made the decision to repell the enemy, which included taking on a T-54 tank using a fuel bladder. Their Huey is shot down and now two crews are trapped behind enemy lines and have to spend night in the desert. On arrival of rescue team in the morning Walden is reported dead. Serling sets out to interview the members of Walden’s crew, but soon learns that not all parts of the original story are so straight forward as he thought and he has to keep the open mind to find the answer for his superiors.

Not exactly a war movie, although depicts events that took place during Gulf War, the investigation itself is set in United States while some of the people involved in the incident are no longer in the army. It is mixture of interviews and flashback scenes, which together set quite interesting plot. Plus really good cast and it makes entertaining war movie / court drama. 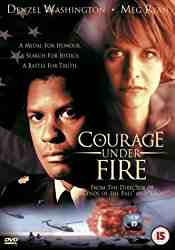 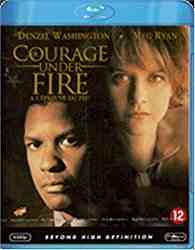 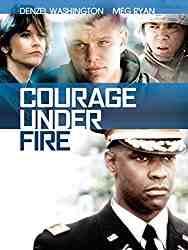 Creators of Courage Under Fire

Cast of Courage Under Fire

Events depicted in Courage Under Fire